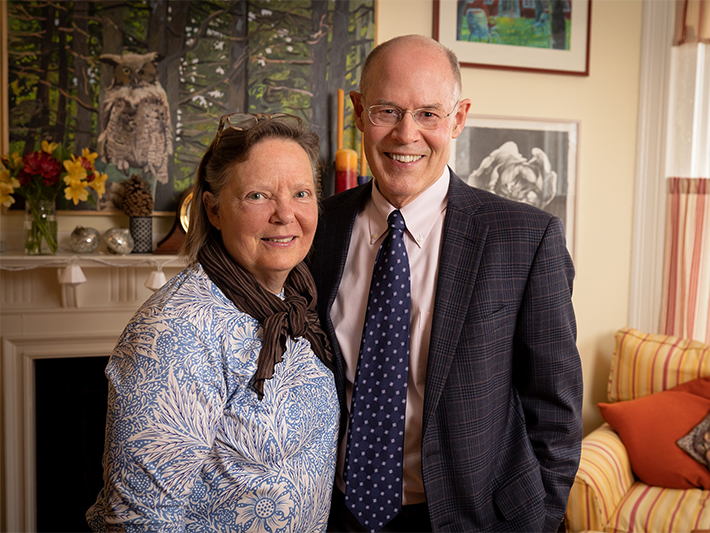 “We’re proud and grateful to have access to outstanding care from a top-ranked hospital that happens to be in our community.” —John Macomber, Mount Auburn Hospital Trustee

John and Kristin Macomber have been patients of Mount Auburn Hospital for nearly half of their lifetimes. As longtime residents of Cambridge, they feel extremely fortunate to have a world-class healthcare facility almost in their own backyard.

“We’re proud and grateful to have access to outstanding care from a top-ranked hospital that happens to be in our community,” says John, a renowned author, thought leader in the field of climate adaptation as it pertains to real estate and construction, and member of the Mount Auburn Hospital Board of Trustees. “You don’t have to travel to downtown Boston to receive outstanding care.” The former CEO of the George B.H. Macomber Company, Macomber is a senior lecturer at Harvard Business School, focused on the future of cities in both developed and emerging areas.

The Macombers’ recent substantial gifts to support Mount Auburn’s Here for You Campaign, the Healthcare Heroes Fund, and other areas of greatest need reflect this deep appreciation, and extend their more than 30 years of generous support. “The Mount takes such good care of us,” says Kristin. “It’s right down the street from our home, and we want it to continue to thrive.”

John and Kristin’s relationship with the hospital began with the births of their two sons. “There were some complications in both instances, so we were fortunate to be at Mount Auburn,” says John. When Kristin was diagnosed with breast cancer following a routine mammogram at the Hoffman Breast Center, she received all her treatment—chemotherapy, radiation, and lumpectomy surgery—there. “Being close to home was invaluable, especially during daily radiation treatments,” she says. “I now know 15 different ways to walk from our home to Mount Auburn.”

Even more important, she says, was her extraordinary care. “The whole breast center team was so very kind and all my care was coordinated,” says Kristin. When the pandemic emerged, the Macombers didn’t hesitate to generously support the Healthcare Heroes Fund, recognizing the urgent need to help the nurses and caregivers who continued to provide the hospital’s trademark personalized care—under extraordinarily difficult circumstances.

Today, they are also proud to support the Here for You Campaign, which will usher in a new model of emergency care at Mount Auburn. “For many Cambridge residents, the Emergency Department (ED) is their front door to the hospital and to their healthcare,” says John. “We are proud to support access to emergency care for absolutely everyone.”

At the same time, John notes, the ED remains a lifesaving resource, just as it was in the days following the Boston Marathon® bombing in 2013, when a critically injured police officer from Watertown was successfully treated by Mount Auburn’s trauma team. “There wasn’t time to get him to Boston, and we saved his life,” says John.

As a member of the Board of Trustees, John recognizes our hospital’s special ability to be a bridge to the entire community—and also appreciates the benefits of being part of the Beth Israel Lahey Health system. “By being true to Mount Auburn’s unique approach and values, we can draw on one of the best health networks in the world, in order to continue to provide extraordinary care and personalized attention as we always have,” says John. Adds Kristin: “Mount Auburn always puts the patient first.” 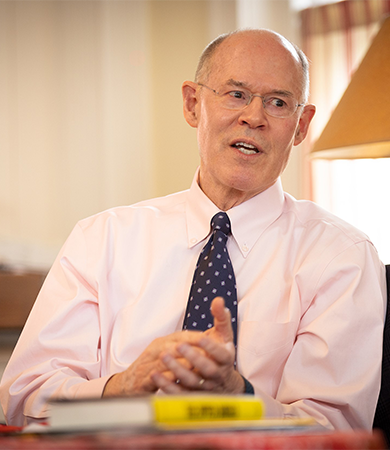