Skip to content
Longstanding Supporters Give Back, Enabling Technology to Move Forward 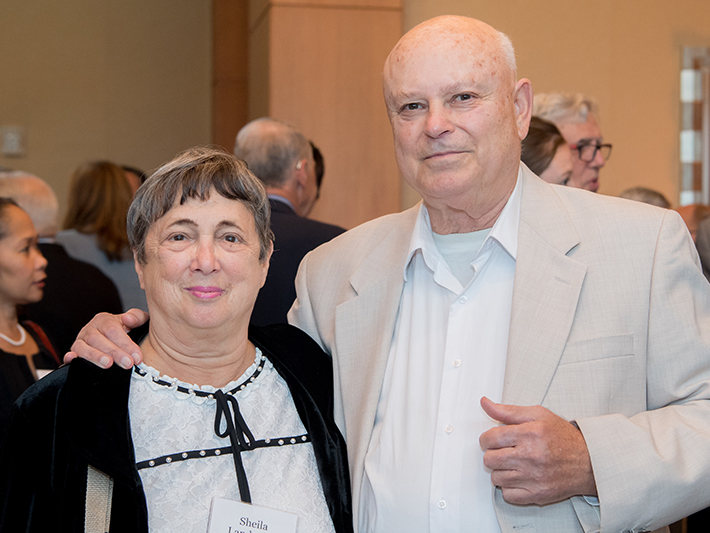 “As a young man, I received scholarships that enabled me to complete my education. Now, Sheila and I want to pass that on. We feel it’s a privilege to be able to help for the common good.” —Emanuel Landsman, ScD

Emanuel “Manny” Landsman, ScD, and Sheila Landsman, longtime residents of Lexington, have been patients of Lahey Hospital & Medical Center for a remarkable four decades—since the inaugural years of the Burlington campus. Honored in 2007 as Lahey’s Philanthropists of the Year, the Landsmans have continually acted as true partners in achieving the hospital’s vision for exceptional patient care.

Having successfully run a large company for 30 years, Manny calls himself a “nuts and bolts kind of guy who likes to poke around to see how things work.” He has been similarly thoughtful about the inner workings of LHMC, which led to the couple’s most recent gift of $3 million to upgrade the hospital’s building automation system, a vital infrastructure project that is slated to begin this year.

As an engineer who holds three degrees from Massachusetts Institute of Technology, Manny maintains that any facility’s infrastructure—while not visible—cannot be neglected. “The building is the container for all that goes on in a hospital,” says Manny. “What’s hidden in back closets can be critical to hospital operations and has to be technologically superior and in top condition.”

The Landsmans’ gift will enable Lahey to upgrade its building automation system to a modern digital data control system that will centrally regulate heating and cooling; electricity and lighting; as well as access and security. Through advanced remote web capabilities, this sophisticated system will support efficient, consistent facilities management. In addition, the upgrade will enable LHMC to maintain a safe and comfortable care environment for patients, families, and staff, including enhanced ventilation and air pressure settings.

“Further automating Lahey’s infrastructure is an important strategic opportunity for our hospital, and we are grateful for Manny and Sheila’s generosity,” says Stathis Antoniades, Chief Operating Officer of LHMC. In full agreement is Paul Cantrell, Vice President of Facility Operations, who is overseeing much of the upgrade work. “The Landsmans are true partners and advocates for change. They have a fundamental vision of where healthcare needs to go with regard to energy savings,” says Cantrell. “As a successful engineer and businessman, Manny recognizes the value of his investment for the community we serve.”

With the new system in place, LHMC’s optimized operations will make a profound impact over time. Its automated capability to alert staff to maintenance issues, accelerating their response time, will extend the lifespan of equipment and bolster the building’s resiliency. In addition, upgrading to the latest technology will enable Lahey to reduce costs and energy consumption—which are priorities for Manny and Sheila.

Over time, the project is expected to reduce both Lahey’s carbon footprint and its operational costs. “The changes enabled by the Landsmans’ generosity will allow us to work toward what we call decarbonization, or being closer to net zero emissions,” says Cantrell, who manages over one million square feet of space at LHMC. “Furthermore, this gift enables LHMC to be a leader and a model in this space, thanks to Manny’s passion for energy conservation.”

The ability to give back is meaningful to Manny and Sheila, who have supported LHMC for 25 years. “As a young man, I received scholarships that enabled me to complete my education,” says Manny. “Now, Sheila and I want to pass that on. We feel it’s a privilege to be able to help for the common good.”